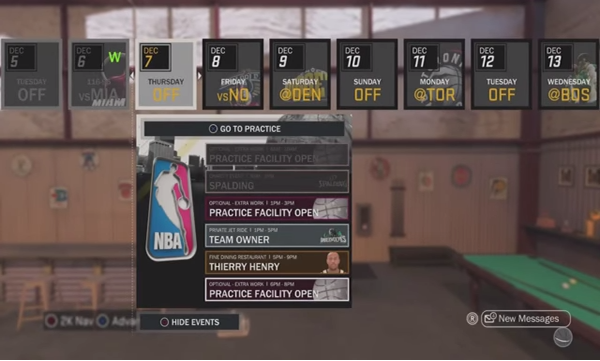 With NBA 2K17 have released for more that a month, the game comes with new mechanics and upgrades though its Virtual Currency (VC) system remains the same as the previous versions.

Players can get VC by participating in the game’s various modes. VC can be invested in MyPlayer for ability upgrades, as well as cosmetic upgrades. But players who tend to be busy with other things find it challenging to participate in NBA 2K17’s several modes.

After a couple updates and patches, a number of cheats and working glitches to earn easy VC have stopped functioning. Fortunately, the game is still far from perfect in terms of how well the variables are encrypted. This gives a few a openings for other glitches to be taken advantage of.

YouTuber GeeSice posted a video outlining a few simple steps to be taken in order to earn VC fast, which can be watched below.

The Calendar should now show all the endorsement schedules and almost every calendar entry will be covered. This will ensure that the MyCareer won’t progress too far without the player actually playing the game and in order to get the most out of the VC, which will be rewarded shortly after.

The next step is to simulate the games that doesn’t have any endorsement scheduled. In the video, GeeSice used the schedule on November 12, where he had a scheduled endorsement with Stance. Players simply need to attend the event.

After the player returns, they need to open the in-game smartphone and check the messages. This involves reading and replying to every single message that “Bruce” has. Breezing through the messages should be done to minimize the time spent and maximize the time used on producing VC.

Once the exchange of messages have ended, most of the time, the players will be rewarded with 4,000 VC courtesy of the endorsement.

After this, the player can now move on to the next scheduled endorsement. As the uploaded have mentioned, some endorsement schedules fall on the same day, so be sure to check thoroughly first before moving to the next date.

This method could be repeated as much as the player would like to and is actually one of the fastest methods around. Be sure to take note though that not every single endorsement will reward the player any VC, but this is rare.

More NBA2K17 news we will post here in u4nba.com, you can keep eyes close in our site.