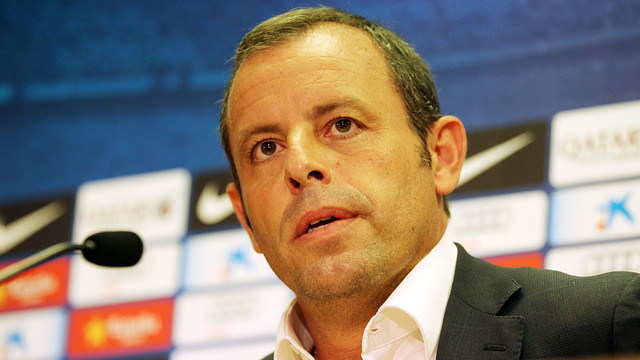 New Barcelona president Josep Maria Bartomeu has insisted that Lionel Messi is not for sale and will negotiate a new deal with the club.

Messi’s future has been the subject of intense speculation this week, with rumours suggesting that Ligue 1 leaders Paris Saint-Germain are considering a bid for the Argentina attacker, whose contract at the Camp Nou expires in June 2018.

“We have no intention of selling Leo. I can guarantee Messi’ s continuity for this season and for the coming seasons,” he said, while praising Luis Enrique.

“He is doing a good job and I am very happy, the team is improving all of the time,” Bartomeu, who will stand for re-election as club president in the summer, said.

Barcelona have the current handicap of being unable to buy players this month or in the summer as the result of a FIFA ban imposed over irregularities regarding the signing of players for the club’s youth system.

“There are people responsible for that who are no longer at the club,” said Bartomeu, who believes the rules over signing youngsters from foreign countries should be changed.

“It is not possible that we can’ t bring in players because their parents cannot travel with them,” he said.