In FIFA 15, corner kicks provide some of the ideal opportunities to score. With the right technique and precise timing, corner kicks can prove to be the game changer. So Corner kicks is important in FIFA 15 Coins if you want to perform an effective attack in a match. Then you need to learn how to use corner kicks to score. Here we have some tips and tricks for you. Though it might be boring to practice the Corner Kicks.

In this guide, I’m going to discuss various techniques involved in taking corner kicks and how to use them effectively.

Who Should Be Your Corner Taker? 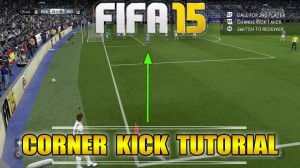 The player taking the kick can be changed by pressing RT/R2 button on the consoles. Although it solely depends upon you to choose your kick taker, I would recommend keeping the tall players near the box since they are good with headers.

As for the kick taker, choose a player with decent power and shooting skills. Usually, players who are good at free kicks like Prilo, Ronaldo and Messi, etc will serve a better delivery.

Positioning of the Target Man Matters

While taking the corner kick, the players can be moved by using the right analogue stick on the consoles.

Using this, you’ll be able to change the position of the receiver. This is particularly important because it allows your player to move to a better suited position and go for the score.

Try choosing a player with best heading skills. For instance, I play with Arsenal and the best players I could choose to head the ball would be either Giroud or Mertesacker based on their height and heading ability.

How Powerful Should The Corner Kick Be?

Although it’s a little tricky to stop the bar between 50 and 70 percent, but if you do, your scoring chances will increase. Furthermore, make sure that you don’t deliver the ball close to the goal keeper as he will be quick to collect the ball.

If you can position your player at the near post relatively free, you will have very high chances of scoring from there.

What Are Dipping Crosses?

For this, you need to press X/Square button and push forward the left analogue stick on the controller. This tactic should be used only when there is a strong player near the box. As for the power, make sure that it doesn’t exceed fifty per cent of the total.

When To Cut The Corner Short

You’ll often find yourself in situations when defenders will be flooding the area near the box. During these situations, corner kicks don’t perform well and your best bet comes down to calling another player forward and then going in with a short corner.

In addition to this, you can also call forth a player and take the normal shot to confuse the defenders. In order to call a player, press LT/L2 followed by pressing the A/X button on the consoles.

This technique can also be useful, especially when you have players with good agility in your team. Just call a quick player, short pass to him and then after dodging one or defenders around the corner, you can deliver an easy and accurate cross into the box.

How To Swing The Ball

In-swing is particularly useful when the kick taker is standing below the goal line. It’s a good idea to aim as near as possible, and do not let the power exceed more than fifty per cent.

As for out-swinging the ball, this should be aimed at the farthest end, and the power should be around seventy per cent. This is particularly useful when you have the kick taker standing above the goal line.